First time I saw this incredibly small computer , I was surprised.I thought how one credit card size electronic board can be connected to your TV , USB keyboard and mouse and then covert your home TV into your full fledge computer.Preciously  I had came across small micro controller, integrated circuits (ICs), but they had limited usage. School students may not get access to such instruments  as these instruments may not be directly used by layman.

Raspberry pi puts itself in different category as it can be used out of box immediately. It works on Unix platform , precisely Rasbian (Raspberry + Dabian). So it can be used in areas where normal computers are not affordable but you still want to give access to computing. This tiny giant not only useful for kids but can also challenge ,more precisely attract ,engineers (makers) to learn about itself. As it works on Unix , it requires us to do some command prompt stuff ,though it has attractive user interface(desktop). But the kids can get comfortable to work on command prompt, which is more important than working with mouse( I believe). It also help kids to learn few visualizing and musical softwares like Scratch, Sonic Pi.
It also helps kids to understand and get access to work with GPIOs (General Process Inputs/Outputs). It allows them to program these GPIOs so they can see computers interaction with physical world like LEDs, motors etc. This interaction can help kids to learn the computing concepts more quickly. 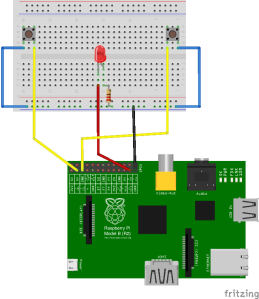 It also can connect to USB microphone to detect your voice and write some voice controlled programs.
More powerful thing it can do ,is to capture images using USB camera or Raspberry pi camera module. Then you can write program to do some image processing.People had also connected the raspberry Pi to internet to showcase IoT (Internet of things) concept.
Raspberry pi allows kids to learn from simple program and holds capacity to allow them to learn machine level programming risking less money ( of their fathers)
So if you want to buy computer/laptop for your kid then you can think of this tiny miracle but before that you can start exploring what this raspberry pi do 🙂

P.S. if you are in pune you can get in touch with Heramb MakerLab to learn about Raspberry Pi
www.Facebook.com/herambmakerlab

This site uses Akismet to reduce spam. Learn how your comment data is processed.